The Bulls beat the Atlanta Hawks 113 to 97 yesterday afternoon, pushing their record to 18-28. The Bulls are on a mini road trip that will see them face New Orleans on Monday, and Philadelphia on Wednesday, before returning to Chicago for a game against the Los Angeles Lakers next Friday night. Kris Dunn sat out the game against the Hawks, and is scheduled to miss the game in New Orleans, as he recovers from the concussion he sustained during the loss to the Golden State Warriors last Wednesday. Jerian Grant and Ryan Arcidiacono (the 2-way contract guard from the Windy City Bulls) filled in for Dunn, with Grant getting the start and shouldering the majority of important minutes.

It was a cake walk victory for the Bulls, jumping out to a fast start and riding the inside scoring of Robin Lopez (20 points) and Lauri Markkanen (19 points) throughout the game. Markkanen had an off night from beyond the 3 point arc, but made up for it by stuffing 6 dunks home with brutal ferocity.

Lauri got mean tonight and threw down six (!) dunks. The rims in Atlanta may never be the same. pic.twitter.com/zKtavBiDtx

The Bulls led wire-to-wire against Atlanta, the ease of victory showing just how good this team has become. At the beginning of the season, most prognosticators had the Bulls battling Atlanta for the number one seed in the draft, but the Bulls have out paced the Hawks and many other tanking franchises.

Robin Lopez did some major work in the first half, dropping 16 points and hitting 8 of his 9 shots: pic.twitter.com/Tnl5RpCch0

The Bulls no longer look like one of the three worst teams in the league. They don’t belong in the bottom 5 of the league, and as the wins start piling up, they probably aren’t even one of the 10 worst teams. The Bulls have found themselves in familiar territory; they are in the middle of the pack.

Here are a couple charts that should illustrate why it is so important to have a top pick in the NBA draft: 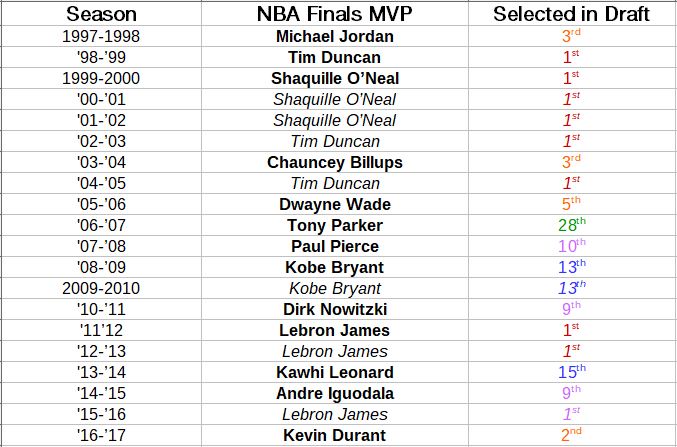 In the past 20 seasons, there have been 14 different players who have won League MVP, and 13 different players who have won Finals MVP. 5 of the League MVP’s and 3 of the Finals MVP’s were the #1 pick in their respective drafts. That means more than a third of the MVP’s, and nearly a quarter of the Finals MVP’s, from the past 20 seasons, were #1 picks. Nearly two thirds of the MVP’s (9), and about half of the Finals MVP’s (7), are top 5 picks. The only player to appear on either list that was not picked in the top 15 of their respective draft class is Tony Parker. He was picked 28th overall in the 2001 draft, and was named MVP of the 2007 NBA Finals.

Lauri Markkanen was drafted 7th overall, and Kris Dunn was drafted 5th overall, so the Bulls are heading in the right direction. Unfortunately, while we fans wait for Markkanen and Dunn to reach their full potential, the Bulls spin their tires in the muck of mediocrity. A top 5 pick this season could really stack the Bulls deck, and eventually send them soaring passed the middle. ‘nuff said.