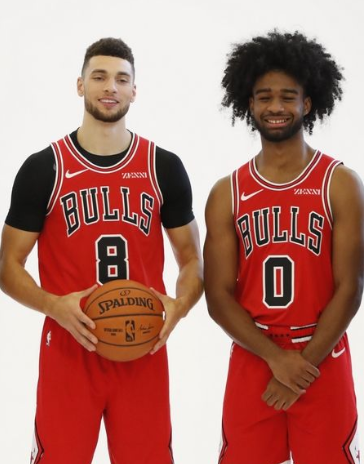 The Bulls went 1 for 3 this week, and are now 10 games under .500 at 20 – 40 on the season. Despite the Zach LaVine and Coby White show finally getting off the ground, the Bulls are struggling against pretty much every team they face. The offense is so bad right now, LaVine needs to score 30+ points in order for the Bulls to even have a chance at winning.

The Bulls beat the Washington Wizards last Sunday, 126-117. It took a 33 point effort from Coby White, and a 32 point effort from Zach LaVine to secure the victory. Wizard’s star, Bradley Beal dropped 53 points but got zero help from his teammates which resulted in the Bulls win. Zach LaVine sympathizes I’m sure.

Wednesday, the Bulls lost a very close game to the Oklahoma City Thunder, 124 – 122. Zach LaVine had the final shot with a chance for the win, but he couldn’t put it through the net. It was another Zach and Coby extravaganza, with the dynamic duo dropping 41 and 35 points respectively. White still isn’t in the starting line up, but he’s been averaging 30+ minutes per game since the All-Star break which is great, and more importantly he’s been closing games for the Bulls. Boylen is letting White play during the most critical portions of a game which is more important for his development than starting.

Last night, the New York Knicks knocked off the Bulls, 125 – 115. It was such a ho-hum game that I started falling asleep in the middle of it. Zach had 26 points, Coby 22. Wendell Carter Jr and Denzel Valentine were back in the rotation, recovered from injury and ready to play. I think Wendell was on a minutes restriction because he only played 18 minutes. It was good to seen both guys back on the floor for the Bulls.

The only reason to watch this Bulls team the rest of the season is for the Zach LaVine and Coby White show. The two of them have been balling out since the All-Star break. Zach is doing his thing, and Coby seems to have figured out a few things about the NBA. Hopefully, as other players return from injury, they can keep the scoring energy at maximum. This is their team now. They should be the only players taking shots for the Bulls, at least until Lauri comes back. ‘Nuff said.

It’s another 3 game week for the Bulls. They take on Luka Doncic and the Dallas Mavericks Monday night in Chicago. They travel to Minnesota for a Wednesday contest against the Timberwolves, returning home on Saturday to take on the Indiana Pacers. Maybe the Bulls beat the T-Wolves this week, but I don’t think they have what it takes to get past the Mavericks and Pacers. I’m guessing this week will just be more of the same.

You’ve probably noticed that my writing schedule has been a bit off the last couple weeks, and you might be wondering what that’s all about. As I’ve mentioned in previous posts, my wife is pregnant and we are now in the final trimester before we get to welcome Peanut into the cruel reality of being a Bulls fan. I’m very excited about the prospect of becoming a father, but as my wife and I head into the home stretch of this pregnancy, more of my time and energy needs to be focused on things other than this crumby basketball team. I am still trying to post twice a week, but you’ll have to forgive me if I don’t succeed at that goal. Rest assured I’m still watching the Bulls, I’m still invested in this rebuild, and I still want to chronicle the eventual redemption of this once beautiful franchise.

Until that happens, thanks for reading and GO BULLS!