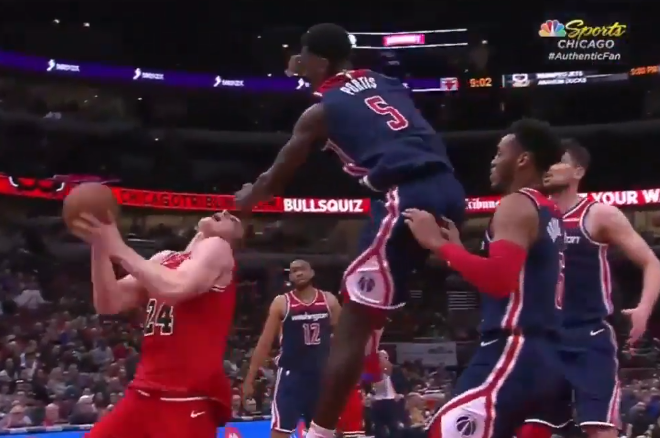 The Bulls went 2-2 this week, with losses to Sacramento and Utah, and wins racked up against fellow tankers Phoenix and Washington. I still don’t know if we should classify the Bulls as a tanking team or not. Sure, they lose. They lose a lot, but they always seem to scrape together a victory (or two) just when they are about to sink into the bottom 3 in the NBA. I guess the Bulls are just a better team than the Cleveland Cavaliers, the Phoenix Suns, and the New York Knicks, and that’s not a bad thing. 3 down, 26 other teams to go.

If you’re a 14%-er, the week started promisingly enough; The Sacramento Kings ran the Bulls off the court in a 129-102 blow out last Sunday afternoon. The big 4 (Lauri Markkanen, Otto Porter, Zach LaVine, and Kris Dunn) all played in that game, but nobody played more than 30 minutes. Zach LaVine led the Bulls with 18 points. Shaq Harrison, Timothe Luwawu-Cabarrot, Wayne Selden Jr, and Ryan Arcidiacono, all played about as many minutes as the starters. The bench got a lot of minutes this week. There isn’t much else to say about the Bulls and Kings. Marvin Bagley III had 21 points, De’Aaron Fox had 17, Harry Giles and Buddy Heild both had 16, and Harrison Barnes had 15. It was a very balanced attack from the Kings. The Bulls were overwhelmed by the pace of the game, and were down by 16 at the half. The Kings never looked back.

Dashing the hopes of Tank Enthusiasts were the wins against the Phoenix Suns (116-101) and Washington Wizards (126-120). The Suns had no interest in playing basketball against the Bulls, sitting Kelly Oubre and a handful of other players, with “injuries” and rest. The Bulls cruised to an easy victory behind Robin Lopez’s 24 points.

The Wizards proved a much thornier opponent to dispatch than the Suns. It took an overtime period for the Bulls to finally put Washington to rest. It was another revenge game from former Bull Jabari Parker. He scored 28 points off the bench for the Wizards, with several wicked dunks and dagger 3’s.

It was also a revenge game of sorts for Bobby Portis. While he didn’t play particularly well against the Bulls, he did viciously rake both his hands across Markkanen’s face, fouling the Finnisher as he went up for a lay up…

Bulls up 1, 49 seconds left and Portis commits the flagrant against Markkanen. Not a smart play. pic.twitter.com/v2i4qYO4uL

It was a dirty play, and it looked like Markkanen let Portis know it was a dirty play after the game when they met at half court to hug it out. Lauri played it cool, and Portis looked a little sheepish, but yeesh! Portis has to do a better job of not getting overwhelmed by his emotions.

Lauri Markkanen returned to form in the Wizards game. He poured in 32 points and grabbed 13 boards. It seemed like every time Jabari Parker made a shot, Lauri matched it. The two went back and forth for most of the game, but it was the play of Kris Dunn that put the Bulls over the top. He scored 26 points with 13 assists and only 2 turnovers. He was 3-7 from beyond the 3 point line, and looked a lot more comfortable shooting from distance, especially in the clutch moments of overtime. It needs to be noted that Zach LaVine sat out this game, and that’s the only time Dunn seems to thrive. On paper the duo of LaVine and Dunn make so much sense; LaVine scoring and Dunn defending. In practice, that pairing is a -8.9 points per 100 possessions on the season, meaning they are a net negative when on the floor together. That’s disappointing to see after all the time they’ve played together, both in Chicago and Minnesota.

Bookending the week with a loss to the Utah Jazz (114-83) last night, the Bulls find themselves 21-53, a game and a half behind Cleveland for the 3rd worst record in the NBA, and five games ahead of the Atlanta Hawks and the 5th worst record in the league. With only 8 games left in the season it’s looking very likely that the Bulls hold onto their 12.5% at the top pick in the draft. Before I get too far ahead of myself, let’s circle back to the game against the Jazz. Markkanen scored 18 points and pulled down 10 boards in a very limited 26 minutes played. Having secured his 20th double-double of the season, Lauri sat most of the 2nd half. Coach Jim Boylen left the game in the capable(?) hands of Shaq Harrison (38 minutes), Antonio Blakeney (27 minutes), and Cristiano Felicio (25 minutes). Needless to say, the Jazz won easily.

Back to the discussion of the Bulls record.

5 of the last 8 games of the season are against teams with winning records, 2 games against the Toronto Raptors, 2 games against the Philadelphia ‘76ers, and a home game versus the Portland Trailblazers. The other three games feature the New York Knicks (twice) and the Washington Wizards. All 8 of these games are going to be a crap shoot at this point in the season. Who knows which players will be resting or “injured” in any one of these contests? The way the Bulls have been playing down the stretch, they’ll probably go 4-4.

MVP of the Week: Lauri Markkanen (6)

He’s played all of these Zombie/end of the season/tankathon games, and started to heat up again at the end of the week. With Zach and Otto sitting out, Lauri has had to shoulder the load, a role he hasn’t had to assume too often in his career with the Bulls. It looks like he might be getting comfortable in that go-to role…

That’s the likelihood the Bulls will receive a top 4 pick in the draft, if they finish the season with the 4th worst record in the NBA. If they some how get into the bottom 3, they raise their chances for a top 4 pick to 52.1%.