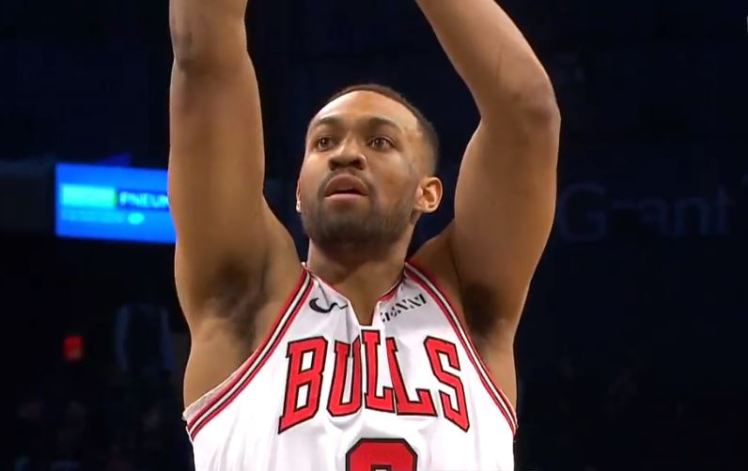 Well slap me in the face like I’m Neil Funk telling Stacey King that Cam Payne could hit seven 3 pointers in a single game, this story might have a happy ending after all! I’m talking about the Tragic Tale of Jabari Parker and the Chicago Bulls, and the sudden resurgence of our titular hero. In case you haven’t heard, Jabari Parker is balling out!

I alluded to Parker’s jump in efficiency when I dubbed him last weeks MVP during the most recent Sunday Update. Both his eFG% (effective field goal percentage) and TS% (true shooting percentage) have been above 70% in the last 15 games since he returned to the Bulls rotation, leading the rest of the team by a wide margin (the next closest teammate was in the low 50% in both those categories). Though playing limited minutes, he is making the most of his opportunities.

His improvement and determination were both on full display in last nights loss to the Brooklyn Nets. Parker scored 22 points in 23 minutes. He was 10-15 from the field, 1-3 from 3 point land. He had 9 rebounds, 3 assists, 2 steals, and 2 blocks. It was the best all-around game Jabari Parker has played for the Chicago Bulls to date. And it looks like HE IS STILL IMPROVING!!!

Parker has been one of the few players on the team that has shown some fight since Jim Boylen took over as head coach. Jabari has worked his way back into the Bulls rotation. He is trying on defense, he is going full tilt on offense. He is winning the skeptics over one nifty pass, one steal, one block, one shoulder shimmying bucket at a time. And it’s beautiful to behold.

Even if this is just the swan song, the epilogue, to his short Bulls career, Parker is going out on his own terms. A week or two ago, Jabari made a little noise in the media, asking for more minutes to show his skills. As those minutes have materialized, Parker has taken full advantage of the opportunity. He might not want to play defense, but he sure as hell wants to play basketball. His month sitting at the end of the Bulls bench in warm ups has made Parker hungry.

When he hits the court he’s playing all out. He leaves nothing in the tank. It’s as if Parker has elevated his game out of desperation, like he never wants to sit on the bench again. Or maybe it’s more like he isn’t taking his place in the game for granted anymore. He appreciates every moment he gets on the court. Maybe I’m just reading a little too much between the lines. Whatever it is, it’s great, and Jabari has been great. Parker has been the Bulls most entertaining player to watch ever since he was reinstated in the rotation.

With the trade deadline approaching, Jabari Parker has be turning heads around the league. It’s not beyond the realm of possibility that a team or two make the Bulls a good offer for Parker. That being said, any trade for Jabari might run into a speed bump or two before it can happen. You see, there is a big impediment in trading Parker: his $20 million dollar contract. His play has been great, and the team option on the 2nd year of his contract is also great. Both of those factors SHOULD make Jabari one of the most sought after players at the trade deadline.

$20 million is an awful lot of money to match in a trade. Most of the players on big money contracts are signed for multiple years, and the Bulls have made it known they don’t want to trade for players on long-term, expensive contracts. The front office wants to maintain it’s financial flexibility. GarPax still have hope they will be able to land a big name free agent (or two) this summer and completely change the trajectory of the team. While I’m skeptical the front office can get that kind of deal done, I certainly think they should try. Parker has been good, but he’s no Kevin Durant, Klay Thompson, or Kawhi Leonard.

If the Bulls are unable to trade Parker they will have an interesting decision on their hands: Do they keep Jabari until the end of the season, or buy him out so he can sign with another team that needs a Power Forward? When Parker was benched in early December the thought was if the Bulls can’t find a trade partner for Jabari they would buy him out after the deadline, making room in the rotation for young guys like Chandler Hutchison, clearing the roster from an over abundance of big men.

The situation has changed, however. Wendell Carter Jr is injured and out for several months. Chandler Hutchison is injured and out for at least several weeks. Bobby Portis has not been playing as well as hoped, and Robin Lopez might be traded or released. Suddenly, the glut of bigs that has bottle necked playing time and development is thinning out. It might be in the Bulls best interest to keep Parker on the roster and in the rotation until the end of the season.

As to the question of whether the Bulls keep Parker for the second year of his contract or exercise the team option and release him to free agency, the Bulls have to release Jabari this summer if they want a shot at a big name free agent. $20 million in cap space is too important/much to have tied up in a defensively deficient player that comes off the bench as a spot scorer. If the question is rephrased as “Parker or Kawhi?” I’m taking Kawhi. Besides, if a big name free agent doesn’t join the team this summer, the front office can always try re-signing Parker to a slightly less expensive contract.

The lesson I’ve learned as a fan and blogger, is never write a player off. Jabari Parker is super talented, and now, super motivated, and it’s showing up on the court and in the stat sheets. He’s writing his own destiny and I hope other teams are taking notice. His effort and energy have been contagious, his teammates are feeding off of his play. Jabari Parker carried the Bulls in the 4th quarter of last nights game. He was 6 for 6 from the field for 12 points. He grabbed 3 of his 9 rebounds, dished out 2 of his 3 assists, and stuffed both of his 2 blocks in that 4th quarter. He was a beast, and the reason the game finished as close as it did (BKN 122, CHI 117).

Jabari Parker may not be in the long-term plans of the Chicago Bulls, but his play since returning to the rotation is changing minds and hearts. He is too talented to not be a significant part of some NBA team. It will be fun to see if other teams agree and make an offer for his services. Until then, thanks for reading and GO JABARI!

Stacey King after the Cameron Payne 3 pointer.
“If you had told me Cameron Payne would make seven threes I might’ve slapped you Neil” pic.twitter.com/YOU2axjfSh