It was another eventful week for the Chicago Bulls. It started with a mutiny on Sunday and continued with a bad loss (89-108) to the Sacramento Kings Monday night. The Bulls were up by 11 points going into the 2nd half, but turnovers (27 for the Bulls in the game) and a resurgent Kings offense quickly sunk the Bulls in the 3rd quarter. A 5 point Sacramento lead at the start of the 4th quarter ballooned to as much as 22 before the buzzer mercifully sounded.

The Bulls traveled to Mexico City for a Thursday night match-up against the Orlando Magic. While this was a much closer game, with several lead changes and neither side getting more than a couple of possessions ahead of the other, the results were all to familiar: Orlando 97, Chicago 91. Minutes before the game started, the news broke that Jabari Parker was no longer going to be a part of the Bulls rotation, at least for the immediate future. The Bulls have decided that with a healthy Bobby Portis and Lauri Markkanen there is no room on the court for the second best scorer on the team. It didn’t take long after the news broke for rumors of trade rumors to start flying.

Jabari Parker is trade eligible as of today. According to a source, “several teams” have called Bulls about Parker. Both Bulls and Parker are amenable to deal.

We’ll get into the Jabari stuff on Wednesday. For now the big take away from Thursday’s game against the Magic was the injury to Zach LaVine. On the very last play of the game, LaVine tried a desperation drive through the lane hoping for some quick points, he landed awkwardly after his layup attempt and screwed up his ankle. The cameras showed him hop-hobbling to the locker room as the game ended. Coach Jim Boylen didn’t sound too optimistic about LaVine returning before the New Year.

Boylen on LaVine: “He’s seeing our guys right now. And he’s going to see some specialists because we want to get as much information as we can. And then we’ll get a diagnosis and start building a rehab schedule.”
Translated: LaVine is almost certain to miss time beyond next 2.

It was gloom and doom heading into last nights game against the San Antonio Spurs. The Bulls hadn’t beaten the Spurs in San Antonio in something like 5 years, and I certainly didn’t expect the Bulls to break that streak this weekend. Thank the Lord, they proved me wrong. Down 19 points at half time, the Bulls battled back in the 3rd quarter, cutting the Spurs lead to under 5 points to finish the quarter. It was Kris Dunn who put the Bulls on his back and got them the win. He met very little resistance from the Spurs defense as he maneuvered around defenders and found his sweet spots in the mid-range. Dunn also seems to have improved his ability to finish at the rim. He made several tough layups and floaters down the stretch, finishing with a team high 24 points on an efficient 11 of 19 shooting (57.9%).

He scored 23 points (9-18, 50% shooting), and nailed a beautiful turnaround jump shot from the left corner to tie the game at 90 points in the last few minutes of the game. As good as Markkanen was, it was Kris Dunn who finished the game for the Bulls. He hit big shot after big shot in the final minute of the game, solidifying the Bulls 98-93 victory. For once, it was an opponent who would fade in the 2nd half and not the Bulls.

It’s great to see Dunn and Markkanen contributing to wins. Maybe this chart will start to look a little different after a few more games, and a lot more wins… 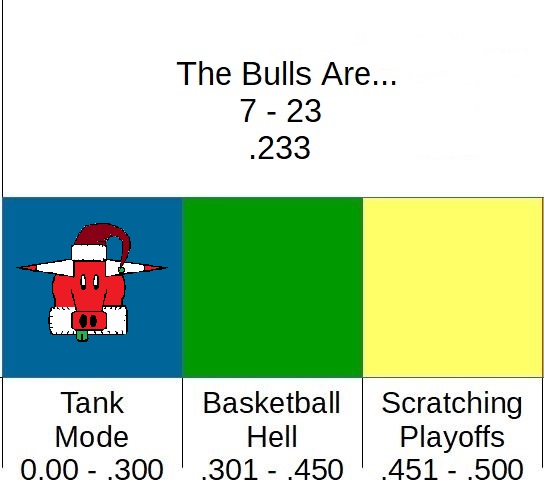 Sometimes you don’t know what you’ve got until it’s gone. That’s especially true of the Bulls and Zach LaVine. Even as the Bulls climbed their way back into San Antonio game, there were numerous possessions when they missed LaVine’s ability to create scoring opportunities. There were a couple shot clock violations that never would have happened if LaVine were on the court. Prepare for the Bulls looking like a completely different team until he gets back.

The Chicago Bulls are 13th in the league for opponent’s points scored per game since Jim Boylen took over as head coach (last 6 games). Opponents are averaging 106.5 points per game under his watch, which is significantly better than the 111.7 points (21st in the league) they’ve averaged the entire season. This improvement even takes into account the awful 133-77 beating the Bulls suffered at the hands of the Boston Celtics. If Boylen had played his starters in the second half of that game, maybe the Bulls would be even higher on the charts.