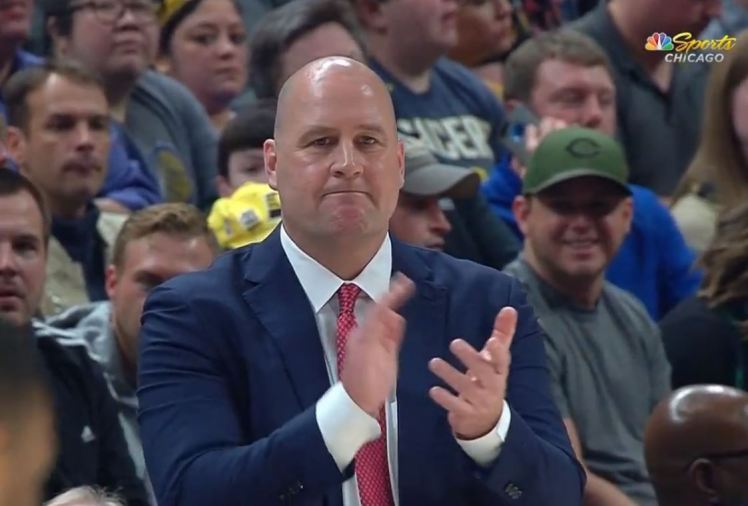 The Coach is dead. Long live the Coach.

By now you probably know a little bit about Coach Boylen’s resume. In his 20-30 years as a coach, he’s helped two NBA teams win 3 championships (the Houston Rockets twice, and the San Antonio Spurs once). He has been an assistant coach under legends like Tom Izzo and Gregg Popovich. He had success in Utah as a college head coach, and his focus is on defense. In short, he has paid his dues and is well qualified to run an NBA team.

By now you’ve seen the John Paxson presser, or read some quotes from it. You know that Hoiberg was replaced because the team had lost it’s competitive “energy and spirit.” Not just on the court but, by the accounts starting to leak to the press, in the locker room as well. Losing was becoming the accepted norm, and that is unacceptable.

By now you’ve read stories about Hoiberg “losing” the team. Players openly questioning his decisions, or flat out ignoring them. The team fracturing before our very eyes; playing selfish basketball.

All of this has played out over the past couple days, and I want you, dear reader, to know–It’s just a smoke screen.

Was Fred Hoiberg a good NBA head coach? No. He wasn’t.

Did he deserve to get fired? Yes, undoubtedly.

Should he have been fired two years ago when his inability to manage NBA egos was painfully apparent? Abso-fucking-lutely.

I’m not here to defend Fred Hoiberg. He did some things well as a coach, and other things poorly. He is the fourth worst coach I’ve seen running the Chicago Bulls…

Not coincidentally, 2 of the top 4 worst were hired by John Paxson (Hoiberg, and Del Negro).

What’s this about a smoke screen? If you read my blog post from a couple weeks ago, Exercising Futility, then you know I believe the reasons for firing Hoiberg are merely excuses. They are the shield that hides the Bulls front office from accountability.

Head coaches get replaced, swap in, swap out, just like batteries in a TV remote.

I’m not going to rehash the entire post, but I want to remind you that Hoiberg was set up to fail. No one could meet or exceed the nebulous expectations the front office set as his benchmark for evaluation: What the hell is “general improvement” of the team?

What I saw on the court so far this season, was a Bulls team that overachieved in the face of devastating injuries. This is a team that has been forced to rely on Ryan Arcidiacono, Shaquille Harrison, Cameron Payne, Antonio Blakeney, and Chandler Hutchison for minutes and production. It’s a miracle that they’ve won 5 games. If that’s not general improvement, I don’t know what is.

Nebulous bullshit, like “lack of energy and spirit,” is just an excuse to fire the coach so it looks like the front office is doing their job. Way to go John Paxson, you eliminated the problem that you put in place to begin with. Attaboy!

Except, Paxson didn’t eliminate the problem, which is a lack of talented basketball players on the roster. He just used Hoiberg as the scapegoat to cover up the real issue.

By now you know my feelings on the GarPax. I won’t dwell on them.

So, what about this new guy, Boylen?

Two things that stood out to me from the game:

1. Coach Boylen had the Bulls playing at breakneck speed on defense. Players were sprinting in their rotations, closing out on opponents with gusto, yelling assignments and switches to each other. By the end of the first half, the entire Bulls team was exhausted from the effort they exerted on the defensive side of the ball. As an old school basketball enthusiast, it was thrilling. It was also the reason the Bulls lost. As the third quarter slipped into the fourth, you could tell the Bulls were fading. Shots were bouncing off the front of the rim, players were missing wide open jumpers; if the Bulls were in better shape, they would have won the game.

Wendell Carter with the mean block, leads to offense for the Bulls pic.twitter.com/IxJwXKs0v8

2. The offense is now focused on driving into the lane and kicking the ball out to the perimeter. This could easily be confused for the basketball cliché of “attacking the basket,” and maybe that’s what was supposed to be happening, but that is not what was actually happening.

The third thing, out of the two that stood out to me, was that bad defenders have nowhere to hide on a team that plays defense at a breakneck pace. While Wendell Carter Jr, Lauri Markkanen, Justin Holiday, and Arcidiacono were flying around the court on defense, it was easy to spot the statues of Jabari Parker and/or Zach LaVine occupying space just outside of the paint. It wasn’t that they weren’t trying on defense, it was more a difference of instinct over intellect. What equated to natural flowing movement on defense for someone like Carter or Arcidiacono, became a tortured thought exercise filled with hesitation and doubt for Parker and LaVine. While Holiday or Harrison danced gracefully to cover an opponent, Jabari or Zach looked around in confusion and stumbled toward their assignment. Both players have a lot to learn on defense.

What can we expect from the Boylen Bulls? I would suggest fans treat this next month as Preseason Part II. Last night showed that the team is not in good enough condition to play the style of basketball Coach Boylen expects them to play. It’s going to take some time for the team to get their wind. It’s also going to take some time for them to learn how to play together in the “new” system. Kris Dunn and Bobby Portis are expected to return from injury in the next week, or sooner, and that means adjusting minutes and roles for Arcidiacono, Parker, and even Wendell Carter Jr.

We’ll see how it all shakes out. I’m kind of excited about Boylen and his demanding defense. I’ve made no bones about wanting Spurs assistant coach Becky Hammon to be the Bulls head coach, but Boylen is more than qualified and seems to have the players vote of confidence (for now). I’m willing to give the man a chance (what choice do we have?).

Swap out, swap in.