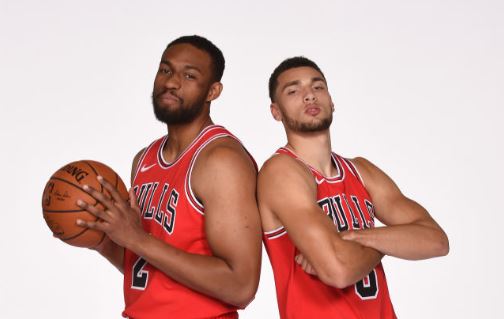 The Bulls started the preseason with a strong 128-116 victory over the New Orleans Pelicans. It’s just the preseason, so I don’t want to get hyperbolic or focus on stats, but it was a good showing from some of the key players in this rebuild. The positives from the game outweighed the negatives, even helping to alleviate the disappointment of last friday’s news: Lauri Markkanen sidelined for 2 months with a strained elbow.

Zach LaVine was explosive. His speed and leaping ability are back to pre-injury levels. He was taking opponents off the dribble, blowing past and finishing with electric dunks. He used his speed to force turnovers on defense, and quick transition baskets on offense. LaVine attacked the basket. He limited the number of inefficient, contested, jump shots he took, sharing the ball with his teammates and using the natural flow of the offense to create his shot.

Both the Bulls and the Pelicans had to shake off some rust. The first 5 minutes of the game was an ugly mess as the two teams tried to remember how the game of basketball was played. When they finally figured things out, the scoring came fast and often. For the most part, the Bulls were making an effort on the defensive side of the ball. Both LaVine and Jabari Parker were engaged on defense. They weren’t caught ball watching, they got back down the court in a relatively timely fashion while in transition defense, and they seemed to be communicating with their fellow defenders, switching when they needed to, helping when they could. It wasn’t quite good defense, but it was effort.

Let’s talk about Bobby Portis. He was awesome in the post on offense! There was a sequence of 4 consecutive offensive possessions in the second half, after forcing a defensive mismatch, where Portis punished the Pelicans in the post. He is the undisputed #1 scoring option for the Bulls coming off of the bench. Last year was not a fluke. He has grown into a mature leader for the team, and he is an invaluable source of consistent bench production.

The rookies, Wendell Carter Jr. and Chandler Hutchison, played some quality minutes. While neither of the two put up gaudy numbers, both contributed in small ways. Carter especially looked like he belonged on the court. He certainly has areas to improve in, and he will make his fair share of rookie mistakes, but he didn’t back down from the challenge of guarding Anthony Davis. On one possession, he forced the Pelican’s All-Star to dribble the ball off his own leg and out of bounds, leaving Davis shaking his head as he jogged back on defense. Later in the game, Carter also forced Julius Randle into an offensive foul with his quick footwork defending the post. Good stuff from the rookie.

Kris Dunn had some nice plays on offense and was solid (as ever) on defense. He had an especially eye-popping dunk after leaving his opponent in the spin cycle along the baseline. Dunn looked comfortably confident on the court.

Let’s finish the schmooze fest with some praise for Jabari Parker. He scored from everywhere. He played within the flow of the game. He was very unselfish, moving the ball as the offense dictated. Parker was one of the few Bulls to hit a 3 pointer in the game (they were arctic cold from beyond the 3 point line). If he continues to play like this, all fears concerning fit and defense will prove unfounded.

Overall, I was surprised at how fluid the Bulls looked on both offense and defense. There were some hiccups, some miscommunications, but, for the most part, the team looked comfortable playing together. It’s the second season around for most of these players in Coach Hoiberg’s system, and they understand where they need to be and what to expect from each other. Even the new players, Parker, Carter, and Hutchison, did a fine job of fitting in. I suspect, as preseason moves on, we’ll see the number of hiccups and miscommunications diminish. This team is not ready to win a championship, but there are some encouraging signs.