Back in the olden days, the NBA season lasted 9 months. From October to the end of June games were played, playoff series decided, and championships won. Then a lull would set in for 3 months. Sure, there was the draft, a single night in a vacuum of zero basketball, but free agency wasn’t as exciting as it is today, and nobody gave a fig about summer league; The NBA was in hibernation until preseason started up in late September/early October.

Over the past 2 decades the NBA summer lull has slowly disappeared. There is always some tidbit of news, some Instagram pic or Twitter beef to sustain the off-season. Also, Modern free agency continues to shift the landscape of the NBA every summer. Whenever an elite group of players works out together it gets posted to the web and a flurry of fan speculation ensues: “Butler is going to team up with Kyrie!” “K.D. is going to L.A. with LeBron!” etc. When it comes to the use of social media the Bulls and their players are no exception, they Tweet and Insta everything about their off-seasons. The following are the best and the worst of the Bulls Summer Social Media…

One of the things that has really taken off during the summer lull is NBA players participating in pick up leagues with other pro players, former college standouts, and retired NBA players. These games usually result in some fun highlights for the NBA player like it did for Zach LaVine when he dropped 50 + points on some unsuspecting schlubs…

Sometimes, things go the other way and it’s an NBA player getting embarrassed by the no name. Enter Denzel Valentine…

Don’t worry Denzel, it’s not like the Bulls just signed anyone that could challenge your minutes. Wait, yes they did…

Jabari Parker has been with the Bulls for a grand total of five minutes and has become the most polarizing addition to the Bulls since Rondo and Wade. In the five minutes after he signed with the Bulls, Jabari has penned a heartfelt and insightful article in the Players Tribune about what it means to come home to Chicago, hosted his annual summer basketball camp for kids, and supported a grieving family suffering the effects of over policing and violence on the South Side. Whatever he is on the court, Jabari is what is good about the NBA off it.

The James Jordan Boys and Girls Club has always been @JabariParker‘s second home.https://t.co/zR4idoZgm6

When your squad shows up to not only surprise your campers, but also you 💯

Watch what happened when some of the guys showed up to @JabariParker‘s camp last week! pic.twitter.com/sIupXrbhOw 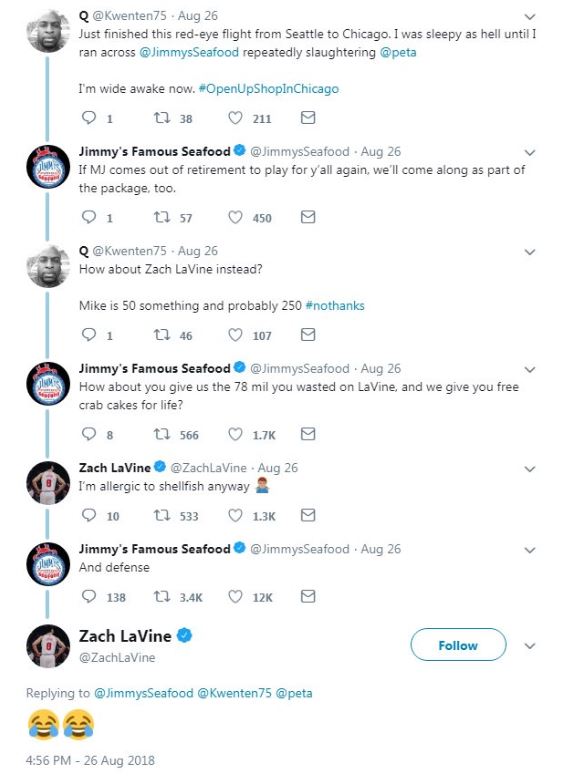 Summer is a great time for NBA players to focus on their “brand.” Bobby Portis used social media to kick-start his…

Pre order sales out now for #CRAZYEYES t-shirt honoring the 22nd pick…don’t miss out! Go to https://t.co/oU6pqIBFlX Get ya Merch, get ya merch! #CRAZYEYES pic.twitter.com/CHEhVB7nJW

And finally, my favorite Bulls Summer Social Media has been the (doctored?) pics coming out of the Lauri Markkanen camp. He seems to have joined a gym…

Can’t wait to see what Lauri Markkanen does for the Bulls this year after putting on some weight 💪 pic.twitter.com/Wr4j0OzsO8

Everybody sleeping on Lauri Markkanen 🙏pic.twitter.com/iQHPEoWBDk

An honorable mention goes to one of my most favorite Bulls of all time, Joakim Noah, who hosted his annual “Rock your Drop” peace march on Chicago’s West Side…

“Even though I don’t play here in Chicago, Chicago is very special to me. It’s somewhere I’ll never forget.”
– Joakim Noah told @KCJHoop

That’s it for this week. Let me know what your favorite social media stories involving the Bulls were this summer. Thanks for reading and GO BULLS!

View all posts by rokdeezbullsblog